I was getting Alice ready for her afternoon nap (okay, non-nap). She was carrying her guys around with her when she went into the spare bedroom. A minute later she came out without her guys. I put Alice into her crib and tucked her in for her non-nap, then I went to look for her guys. Didn’t want these ones to get lost so soon. 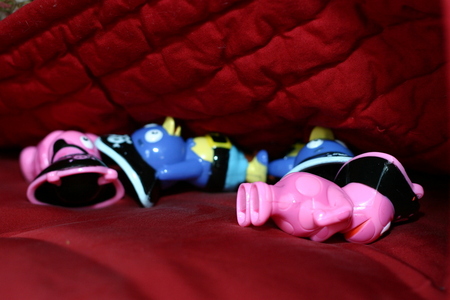 Turns out she had put her new guys under the comforter on the spare bed … with the original two guys. All this time the first two guys had been on the spare bed, while we were tearing apart the rest of the house. I thought it was especially funny that she put the new guys in with the old and didn’t say a thing to me.