Yesterday morning I was trying to take Chase to the basement. He was biting me and trying to get me to take him outside. I picked him up and took him to the basement. He was having none of it and fought me the whole way. Before we got to the landing he jumped out of my arms and landed hard against the basement door. He immediately started yowling and favouring his right hind leg. We took him to the Fish Creek Pet Hospital right away and saw Dr. Mark Norman. Because Chase hates his regular vet visits soo much (he’s going to be sedated for his next shots), we decided it was best if we observed him at home for 24 hours to see how he behaved. We were both pretty convinced the leg was broken, but since it didn’t look like a dislocation there was no need to treat him immediately. Once he was home again, Chase stopped putting any weight at all on his leg. This reinforced our suspicion that he’d broken his leg. Today I packed Chase up again and took him back to Fish Creek Pet Hospital. Dr. Norman was there, but Chase saw Dr. Dave Walker instead – he’s an orthopedic specialist. The first thing they did was put a plastic bag around his kennel and administered ‘iso’ to make him sleepy. This was a great idea, since it meant Chase wouldn’t injure any staff members while he was being examined. Once he was unconscious Dr. Norman examined the leg. Sure enough, it was broken. The X-ray confirmed two broken bones. 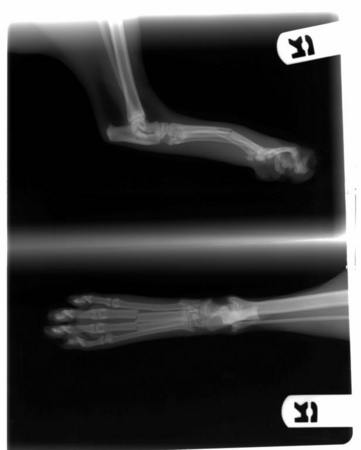 The next step was to prep his leg for a cast. Once Dr. Walker had the cast on and set they took another X-ray. 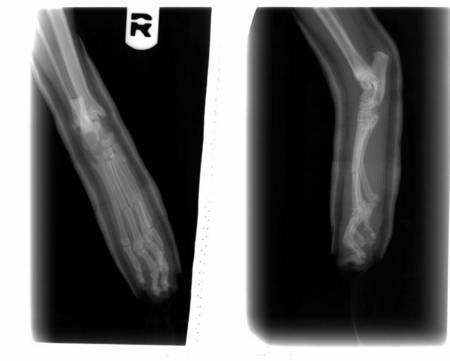 They also gave Chase a little hydromorphine to make him more comfortable once he woke again. They don’t recommend pain meds for animals since it makes them feel better, and then they agravate their injuries. Chase has to tough it out, poor little guy. Chase has to return in 3-5 days for a follow-up visit. They did a ‘bi-valve’ on the cast – meaning they cut it in half and taped it back together again. This makes later exams easier. Chase will need to be in a cast for about 6 weeks, which I’m sure he’ll absolutely hate. On the upside, his prognosis is good. 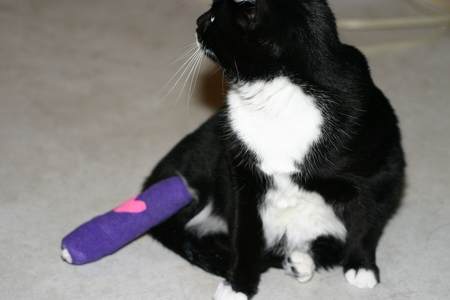